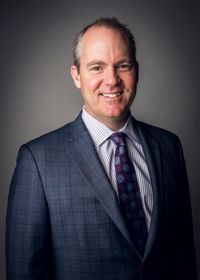 Michael is the managing member of West Wealth Group as well as the owner of Ensemble Wealth Management. He is an Investment Advisor Representative and Certified Financial Planner™.

Michael has over 22 years of experience in the financial and retirement planning industry and is fully licensed in securities and insurance services. From the age of 12, Michael knew he wanted to be involved in the financial world. His early dreams of being an investment banker on Wall Street were quickly replaced with the idea of owning his own independent wealth management firm. After graduating from the University of California, Santa Barbara, he began his career working for a major insurance company in Beverly Hills. Shortly after, he obtained his CFP® designation and his dream became reality.

Michael resides in Rancho Mirage with his wife and four children. When he isn’t in the office, Michael can be found on the sidelines of our local baseball, soccer, or softball fields, depending on which of his kids are playing. Michael enjoys spending quality time with his family, playing poker, and fishing.

Michael is active in our local communities and is a proud member of the Palm Desert Area Chamber of Commerce (PDACC).

View our locations and find contact details for your nearest office.